The new East - West Cycle Superhighway in London: before & after pictures

Almost exactly a year ago I took a walk from Tower Hill to the Houses of Parliament. Transport for London had just started construction on the new Cycle Superhighway along here and there were three construction sites; on Lower Thames Street, outside Somerset House and alongside Westminster Pier. I came to have a look at how progress was coming along and to get an idea of how wide they were going to be. I also took the opportunity to photograph the rest of the road where work was not taking place to document what the road conditions were like at the time. 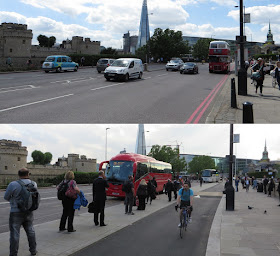 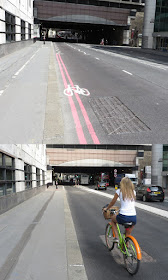 with the exception of  where the carriageway was restricted due to the Superhighway construction works, where there were queues 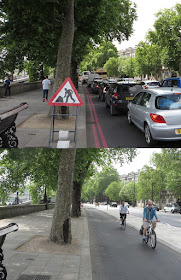 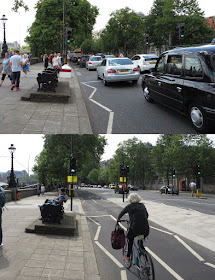 There were also very few lorries using the route, whereas had I taken the pictures during the week I'm certain I would have captured many images of lorries 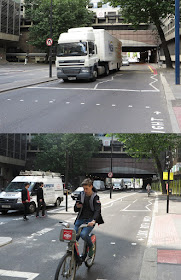 Before the Cycle Superhighway arrived I'd never seen any children cycling on this road, either on their own bike or sat on an adults bike, aside from when the freecycle events were taking place or the London Cycling Campaigns Space for Cycling Big Ride in 2014 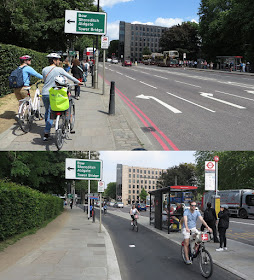 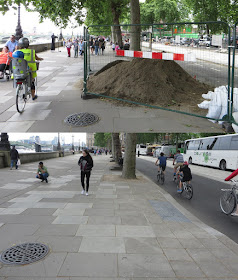 Since the Superhighway has been completed I've seen children here every single time I've visited at the weekend, either with adults 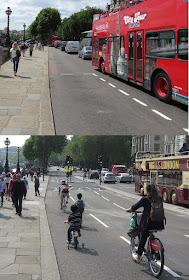 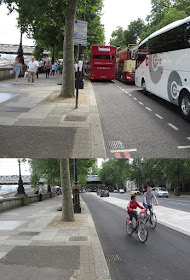 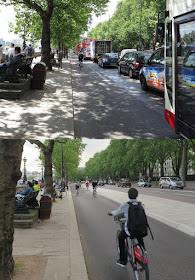 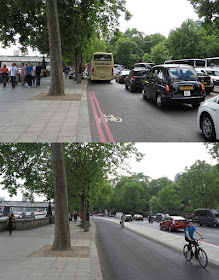 or young friends cycling together in groups 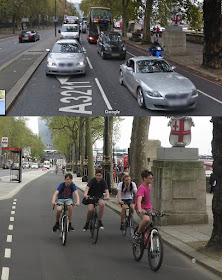 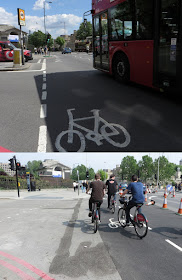 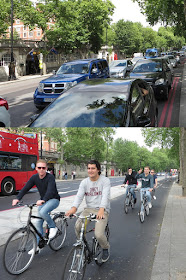 I have also cycled along the entire stretch of this road with my four year old sat on my bike, as have many other parents

Blackfriars underpass was terrifying a few months ago - now I let my kids cycle on it - east west #cyclesuperhighway pic.twitter.com/SSQAXToYBW
— Mark Wilson (@markhwilson) May 7, 2016

How can anyone be against this enabling infrastructure? #RoseBud 💖 cycle tracks! pic.twitter.com/aoFy2MJsGS
— The Ranty Highwayman (@RantyHighwayman) May 14, 2016 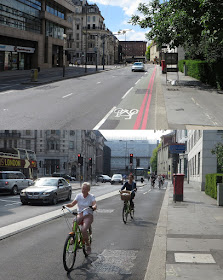 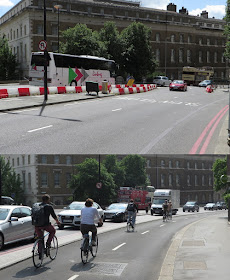 It amuses me when anyone makes the arguments that 20mph speed limits on main roads will increase cycling levels in any significant way. Would this road have a higher cycling rate had these 30 signs been replaced by 20 signs instead of the cycle track being built? 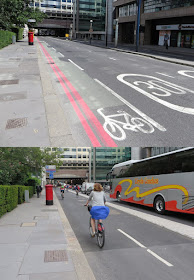 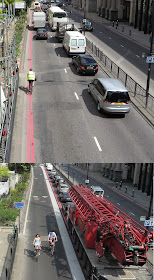 People do not have to "keep their wits about them" 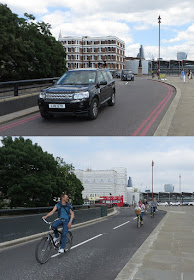 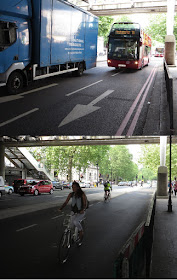 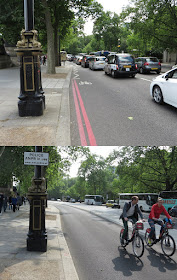 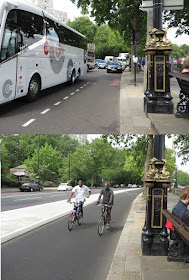 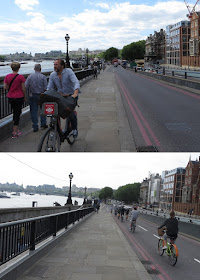 or rubbish painted cycle lanes slicing pavements in half 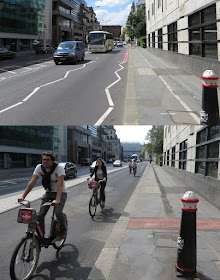 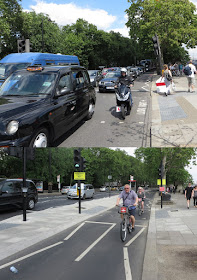 and more pavement space has been created, along with new pedestrian crossings and improved public realm 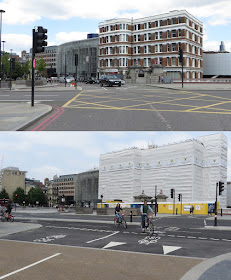 The cycle track can also be used by people on mobility scooters too of course, a common sight in the Netherlands

This new Cycle Superhighway wasn't built particulary because the authorities wanted to provide safe cycling facilities or significantly increase the share of cycling trips in the Centre of the capital; people had to fight for it. Back in 2011 Transport For London consulted on changes at Blackfriars, proposing a motorway interchange style junction comprising of multiple lanes of traffic, an increased speed limit, removing pedestrian crossings (directly outside a tube station entrance) and a few narrow advisory cycle lanes 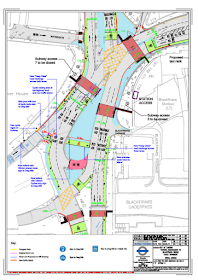 Under these plans had you wanted to turn right approaching this junction on a bicycle from either direction then you'd have had to cross two lanes of fast moving traffic to do so. The plans were totally unacceptable for a junction with such a high casualty rate in the heart of the City. A lot of people protested, there was a mayoral election with "Love London, go Dutch" commitments from all mayoral candidates and then, to cut a long story short, the new Superhighways were built and some others upgraded

There has been a lot of nonsense written recently about reducing the capacity of road space in Central London for the superhighways. Victoria Embankment was opened in 1870, reclaiming acres of land from the River Thames. Designed by Joseph Bazalgette its main purpose was to accommodate a low level sewer with the added benefit of space for a new underground railway alongside and a new road on top, creating a new link from Parliament to the City and relieving the heavily congested Strand of some of its horse drawn traffic. Tram lines were added some 30 years later and these ran until the 1950's before the space taken up by trams was given over to more space for motor vehicles right up until this year when roughly the same space the trams took up was converted into the Cycle Superhighway.

The remaining section of Upper and Lower Thames Street has been a street transporting Londoners for centuries and was first mentioned over a thousand years ago with all buildings on the street destroyed during the Great Fire of London in 1666.

Below shows Thames Street (as it was then known) in 1965, shortly before all buildings to the left were demolished to widen the street

London Bridge, which spans the road here was also demolished (and sold to an American where it continues to be used to this day in Arizona) before a widened bridge was constructed between 1967 and 1972 (lets hope that the plans for cycle tracks on it also becomes a reality).

The photo below is of Lower Thames Street in the 1950's at the end of Monument Street. The Old Billingsgate Market on the right survives as a well used events space but again all buildings on the left were demolished to make way for a wider road

The building on the left with the colonnades in the 1950's photograph was the London Coal Exchange and a large campaign was fought to save this building from demolition with the Victorial Society and John Betjeman heavily involved. MP Tom Driberg made a speech in parliament where he said "The coal exchange is a national monument in the fullest sense of the phrase, and its destruction would be unforgivable". Despite becoming a Grade 2 listed building in 1958 it was demolished in 1962, the same year the Euston Arch was demolished, both to much public outcry. The determination to plough a four lane road through the heart of the ancient city won the day. The only surviving remnants of the Coal Exchange are the Dragon statues, which were relocated to the Embankment to mark the boundary of the city with replicas then erected elsewhere in the City


Below is a post war map of the area. The coal exchange can be seen on the left side of this image. Despite some "ruins" on the map following the blitz many more buildings were destroyed to widen Thames Street, which now runs North East once it passes Harp Lane to join up with Byward Street to continue north of The Tower of London, creating an artificial hill as it climbs over the District Line tunnels (requiring a change of gear if you ride a heavy Dutch bike like myself).
The former Chancellor of the Exchequer Nigel Lawson recently commented in the House of Lords that the Cycle Superhighways were "doing more damage to London than almost anything since the Blitz". This was following claims from Lord Higgins that the cycle tracks were "causing pollution", an argument I have heard far too many times. What short memories these men have of great swathes of the capital being demolished in the 1960's and 1970's to make way for the motor car, acts which contributed to the congestion and pollution we have today

The worst thing to happen to LDN since blitz was the destruction of so many homes & communities to accommodate cars pic.twitter.com/aWWfyhusxu
— Hackney Cyclist (@Hackneycyclist) December 14, 2015

London was far from alone in doing this of course, it happened in cities all over the world. Slowly though, many are now undoing this damage and giving space back to people. The creation of the superhighway along the Embankment and Thames Street is a huge step forward in making London a more liveable city. It has transformed some of the streets of London and allowed many children, tourists and just about anyone who wants to get about by bike in Central London to do so. The London Mayor Sadiq Khan promised to continue the cycle superhighway program with a focus on segregation, trebling the length of them and promising to make London a "byword for cycling". This is alongside other measures such as pedestrianising Oxford Street, at long last. With three cyclists and two Oxford Street pedestrians killed since Sadiq became mayor lets hope he sticks to his promises and Londoners put pressure on him to do so.